Microsoft's "Shared Experiences" allow you to start a task on one device and finish it on another,

or easily set up a remote control or other companion app on a smartphone.

Shared Experiences between Windows 10 and Android devices, and is highlighted in the Settings app

in the Creators Update. It promises to be a pretty useful feature. Unfortunately, only a small handful of

app developers have bothered to implement it yet.

This feature is now known as "Shared Experiences" in Windows 10's Creators Update. However, this

feature is codenamed "Project Rome" and was previously referred to as "Cross-Device Experiences".

You'll see it called different things in different places, but they're all the same thing.

Microsoft recognizes that most people use multiple devices, from PCs and tablets to smartphones and

home media centers. Shared Experiences are designed to help you more easily move what you're doing

between these devices, or just help the devices work better together. It’s similar to Apple's handoff, which

allows you to move open web pages and other tasks between Macs, iPhones, and iPads.

For example, say you were working on a document in an application on a desktop PC. If that application

had this feature built in, you could quickly send the document from your desktop PC to your laptop and

continue working on the laptop.

Video and music applications could use this feature to quickly give you a remote control. For example,

if VLC added support for this feature, you could start playing VLC on a large screen. You could then pick

up your smartphone, open the VLC app, and the VLC app would automatically notice you're playing a video

and give you a remote control interface.

On a technical level, Shared Experiences enable a few features developers can use to discover your other devices

via the cloud, or via Wi-Fi and Bluetooth low energy if they're nearby. 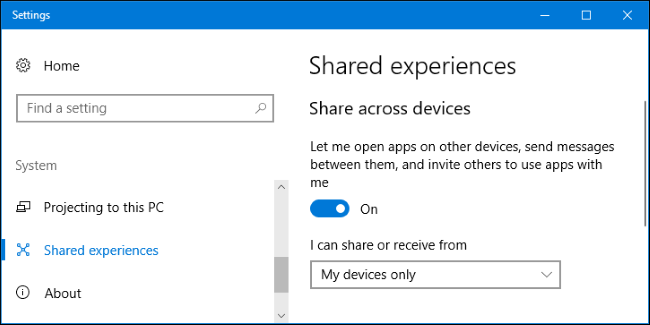 From here, you can disable this feature, if you like. It’s enabled by default.

same Microsoft account to use this feature. You can also select "Everyone nearby"if you want to give

everyone near you permission to use the cross-device communication feature with your PC.

While Microsoft talks a good game, very few applications have actually implemented this feature at the

moment. In fact, it’s very difficult to find any applications that have implemented this feature at all.

One example is Notepad U, a very simple text editor available in the Windows Store on Windows 10.

If you install this application on two different Windows 10 PCs, you’ll be able to click a Send To button

on its toolbar and send your open document to your other devices running Notepad U.

Click the name of one of your PCs and your open document instantly appears in the app on the other PC.

This is a good example of Shared Experiences in action, and similar features likely will come to Microsoft Office

and other applications soon. For now, though, Microsoft hasn’t even added this feature to its own applications,

so they have a lot of work to do.